Alnwick Castle: The Home of the Duke and Duchess of Northumberland 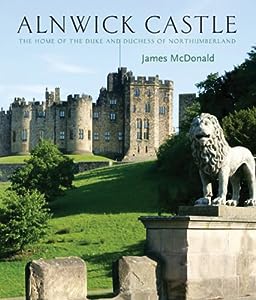 Alnwick Castle: The Home of the Duke and Duchess of Northumberland

Alnwick in Northumberland is an historic market town with a thousand years and more of history. Its castle, home of the powerful Percy family over many centuries, attracts tens of thousands of visitors every year. The Duchess of Northumberland over several recent years oversaw the development of a fabulous new garden but the history goes way back. James McDonald has now written the story of a castle which successfully combines being an important historic monument and a major tourist attraction with being a family home - Alnwick Castle: The Home of the Duke and Duchess of Northumberland.

Alnwick Castle is at the heart of Northumberland, England's most northerly county, a land filled with ancient market towns, golden beaches, moorland, and the remains of Hadrian's Wall. This imposing medieval castle sits by the River Aln on the edge of Alnwick town overlooking a landscape by Capability Brown. The home of the Duke and Duchess of Northumberland, Alnwick Castle has belonged to the Percy family for over seven centuries. One of the largest inhabited castles in Britain, it is also visited by hundreds of thousands of people every summer. Some visitors are intrigued by the staterooms, some because the castle was used as 'Hogwarts' in the first two Harry Potter movies: very few until now have seen the private rooms.

With unique access to both the castle and the Percy family archives, and the full cooperation of the Duke and Duchess, their staff, builders and interior designers, James Mcdonald takes the reader on a tour of twenty-first century castle living. He goes behind the scenes to talk to those who help make the castle function as a home for a modern family, and he visits both the extraordinary garden and the surrounding Hulne park. While describing the changes each generation of Dukes and Duchesses has bought, above all this is the story of Jane Northumberland, who since becoming Duchess in 1995 has remade the private side and has renovated the state rooms, blending English country house style with the existing Italianate grandeur.

Illustrated with archive pictures and some 300 new photographs of both public and private rooms, this sumptuous book is a revealing portrait of one of the world's great castles, its magnificent recent restoration, and the people who live and work here.

The name Northumberland in many minds conjures up images of industrialised Tyneside. Since the 1970s, however, when many county boundaries were changed, the county lost its major connurbation and has since been a highly rural area including the remote upland areas between Hadrian's Wall and the Scottish border. Parts of the county are so thinly populated and "light-pollution" is so low that  a "dark park" has been announced within the Northumberland National Park as an area from which the stars can be seen with exceptional clarity. We must also not forget to mention the Northumberland coast, beautiful and at time spectacular, full of history with its ancient castles guarding against aggressive incomers from the sea.

Northumberland Churches: From the Anglo-...

only £14.99
In Stock
View Add to Cart
CERTAIN CONTENT THAT APPEARS ON THIS SITE COMES FROM AMAZON SERVICES LLC. THIS CONTENT IS PROVIDED 'AS IS' AND IS SUBJECT TO CHANGE OR REMOVAL AT ANY TIME.