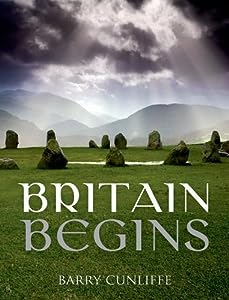 Britain Through Books are happy to display the excellent 'Britain Begins' at a substantially reduced price. A great book and great value for money.

The last Ice Age, which came to an end about 12,000 years ago, swept the bands of hunter gatherers from the face of the land that was to become Britain and Ireland, but as the ice sheets retreated and the climate improved so human groups spread slowly northwards, re-colonizing the land that had been laid waste. From that time onwards Britain and Ireland have been continuously inhabited and the resident population has increased from a few hundreds to more than 60 million.

Britain Begins is nothing less than the story of the origins of the British and the Irish peoples, from around 10,000BC to the eve of the Norman Conquest. Using the most up to date archaeological evidence together with new work on DNA and other scientific techniques which help us to trace the origins and movements of these early settlers, Barry Cunliffe offers a rich narrative account of the first islanders - who they were, where they came from, and how they interacted one with another. Underlying this narrative throughout is the story of the sea, which allowed the islanders and their continental neighbours to be in constant contact.

The Usborne History of Britain (Internet...

Houses of the National Trust

£18.95 £13.26
In Stock
View Add to Cart
CERTAIN CONTENT THAT APPEARS ON THIS SITE COMES FROM AMAZON SERVICES LLC. THIS CONTENT IS PROVIDED 'AS IS' AND IS SUBJECT TO CHANGE OR REMOVAL AT ANY TIME.