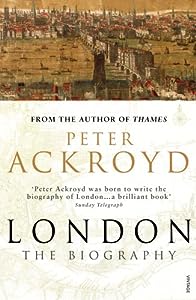 When the eminent novelist and biographer Peter Ackroyd finished writing London: The Biography, he almost immediately had a heart attack, such was the effort of his 800-page work about the "human body" that is this most fascinating of cities. And not just any human body either, but "envisaged in the form of a young man with his arms outstretched in a gesture of liberation... it embodies the energy and exaltation of a city continually beating in great waves of progress and of confidence."

Probably there is no one better placed than Ackroyd--the author of mammoth lives of Dickens and Blake, and novels such as Hawksmoor and Dan Leno and the Lime House Golem which set singular characters against the backdrop of a city constantly shifting in time--to write such a rich, sinewy account of "Infinite London".

Ackroyd's London is no mere chronology. Its chapters take on such varied themes as drinking, sex, childhood, poverty, crime and punishment, sewage, food, pestilence and fire, immigration, maps, theatre and war. We learn that gin was "the demon of London for half a century", and that "it has been estimated that in the 1740s and 1750s there were 17,000 'gin-houses'." Fleet Street was an area known for its "violent delights" where "a 14-year-old boy, only 18 inches high, was to be seen in 1702 at a grocer's shop called the Eagle and Child by Shoe Lane." By the mid 19th century "London had become known as the greatest city on earth." By 1939 "one in five of the British population had become a Londoner."

Though London's chapters vary meaning that it can be dipped into at random, Ackroyd is employing a skilful and continuous theme throughout, which constantly links past and present--the similarities of children's games in Lambeth in 1910 and 1999; the obsession with time--"in 21st-century London time rushes forward and is everywhere apparent", while in 18th-century London the church clock of Newgate "regulated the times of hanging." Above all, he insists that the "dark secret life" of the metropolis is as relevant today as it was in perhaps its most appropriate period, Victorian London.

Again and again Ackroyd returns to the image of London as a living organism, hence his use of the word "biography" in the title. At once awed by and intimate with this "ubiquitous" city, he stresses that "it can be located nowhere in particular... its circumference is everywhere." –-Catherine Taylor

That Mighty Heart: Visions of London

only £21.00
In Stock
View Add to Cart
CERTAIN CONTENT THAT APPEARS ON THIS SITE COMES FROM AMAZON SERVICES LLC. THIS CONTENT IS PROVIDED 'AS IS' AND IS SUBJECT TO CHANGE OR REMOVAL AT ANY TIME.